Described by the studio as a “sky scratcher” as it is “too thin to really qualify as a skyscraper”, the building has been submitted to planning authorities. 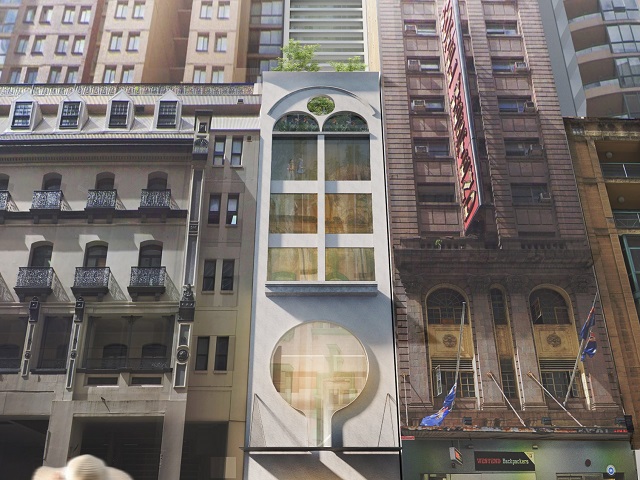 Because of its height-to-width ratio of 16:1, Pencil Tower Hotel is boasted to be Australia’s skinniest skyscraper when it is complete.

The 100-metre-high tower is set to be built in the downtown area of Sydney on a site at 410 Pitt Street that has a street frontage that is only 6.4 metres wide.

In total, the hotel would contain 173 hotel rooms with six suites on each floor. It will stand on a seven-storey podium building that will contain a lobby, cafe and lounge and be topped by a spa on the upper floors that opens out onto a projecting balcony.

According to Durbach Block Jaggers, this will make the skinny skyscraper resemble the arrangement of a column on a base topped with a capital.

“An improbably narrow, six-metre-wide site is envisaged for a 100-metre tower in the downtown area of Sydney near its central station,” said the studio. “Our proposal embraces this extraordinary attenuated quality, proposing a ‘column’ tower on a low scale podium.”

Durbach Block Jaggers has designed the podium to reference the adjacent facades at street level, while the tower has a paired-back modern facade and the spa is covered by a slender vaulted roof with a tiled ceiling.

“The podium references the delicacy and detail of its heritage neighbours, using the language of grand arching brickwork,” the studio said.

“The capital is joyfully expressed as a flying balcony and shell curves of a rooftop sundeck, pool and ‘hammam’ spa. The soffit of the curved ceiling is brightly tiled, visible from both the street below and the city beyond.”

The tower will be largely constructed without the use of cranes due to the constraints of the site.

While the six-storey podium section will be built using traditional concrete columns and slabs, the upper floors will be made using steel formwork that will become part of the permanent structure.

“Crane access above level six becomes a challenge given the narrow site,” said the studio. “Construction methods will utilise permanent steel slab forms and permanent formwork for walls that can be handled and assembled without a crane. The floors and walls will then be reinforced,” it continued. “In many ways, the building is hand made.”