Austrian firm Feld72 has constructed an entire housing estate in Austria from a timber that will grey over time and blend in with the natural landscape.

Situated in the alpine town of Bludenz, the complex, named Meierhof, has 68 apartments in eight blocks, ranging from one to four bedroom configurations, each sharing one ground-floor common room managed by the city. 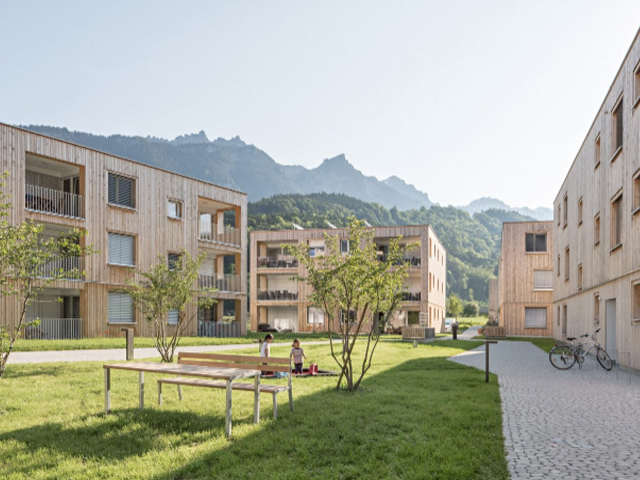 Landscape architects Gruber + Haumer have partnered on the project to create large open greenspaces around a pedestrian pathway, including a central courtyard.

At first the eight blocks appear to all be the same design, but in reality no two are alike. They all have slight moderations.

Every block has a green roof and solar thermal collectors, and each apartment has a balcony or an outdoor terrace.

Built for housing cooperative and developer Wohnbauselbsthilfe, the Maierhof is a hybrid wood construction that uses prefabricated elements for the facade.

“This design not only speeds up the construction process but also increases the quality of execution,” the firm told Archdaily.

“Vertical slats of native silver fir – untreated and unpolished – are arranged with different widths, giving the outside a playful character. A circumferential metal band structures the façade upwards and marks the transition between the ground floor and the two upper floors.

“The freely arranged façade openings, square in shape, as well as the wooden window surrounds,  were designed with the style of the original Zürcherhaus in mind,” they said.

The Zürcherhaus is a nearby heritage-listed three-storey home that was built in 1370 and typifies the architectural style of the area.

Lines of wildflowers have been used instead of walls to discreetly mark the definitions between blocks and between private and semi-public spaces.

With a focus on pedestrians, the complex is mostly car-free, with access in and out of the underground parking area limited to one edge of the site.

Hoa's house is a house designed with the philosophy that is called “emotional architecture”. The building is arranged ...

Parramatta Mission, in conjunction with City of Parramatta Council, has successfully completed an architectural design excellence competition for ...

Prized for its natural warmth and reliable performance, timber flooring represents a quarter of the flooring market. Within this ... 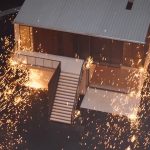 Our great southern land is changing.  Extreme weather events are rapidly increasing in both duration and frequency and ...