Asked by the clients – a married couple with a teenage daughter – to decorate their apartment in a prestigious residential complex in Moscow near the Sokolniki park, the designers chose a modern take on classic European style for the interiors. 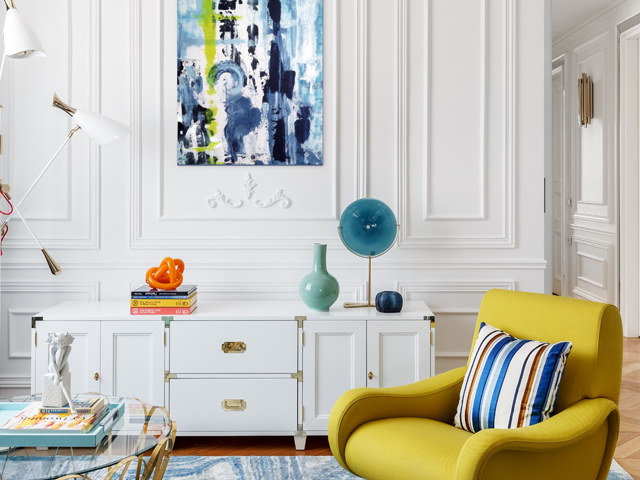 Initially the team worked with a monochrome colour palette but decided subsequently to add striking colours.

“The neoclassical style and the colour white served as the starting point of this interior. White cornice mouldings create a beautiful contrast with colourful modern furniture and add a certain cultural context: such an interior might have been found in any European capital.

“The apartment’s planning is simple and logical: it consists of three rooms with a big living room and a space that combines the kitchen with the dining room, and two bedrooms — master bedroom and the daughter’s bedroom,” Covet House said in a press release.

Touches such as the chandelier and standing lamps which pay tribute to the jazz musician Duke Ellington, give the apartment an eclectic and almost provocative aesthetic.

The master bedroom is painted in Tiffany turquoise and filled with mirrors: a mirror door slope, a mirror above the bed and nightstands that seem to slowly melt into the air.

The bathroom makes bathing seem like the ultimate luxury, designed with touches like a black free-standing bathtub and a contrasting black and white floor pattern and copper and gold accessories completing the picture.

A custom pattern of marble panelling in the bathroom is intended to resemble the river current.