Berlin cinema gets an ‘electric’ transformation with neon lights

Batek Architekten opened up the foyer of the historic building, which has stood in Pankow in north Berlin since 1870, by removing a glass and steel structure that separated it from the hallway. 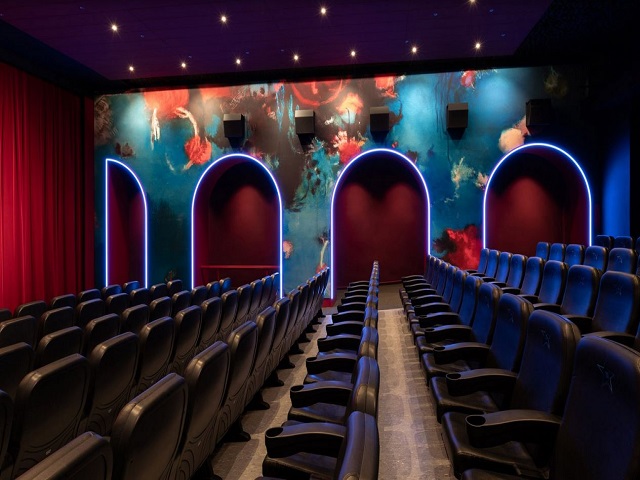 The newly-opened up entrance area of the arthouse cinema is now a welcoming space with a long, curved bench and a refreshment counter clad in zigzaging metal.

Here, the studio chose to use a saturated, deep red for the velvet-clad seating, the counter, and a mobile snack bar. It complemented the red hue with an aubergine colour that climbs halfway up the walls.

“The walls here are bicoloured: the bottom two metres are painted deep aubergine and above in pale grey,” Batek Architekten founder Patrick Batek explains. “We further chose metal zigzag cladding for the main counter – representing a classical pattern with a modern material. For the countertop, we chose brass as a warm and classy material.”

A painting that hangs in the foyer of the 435-square-metre cinema informed the colour choice for the entrance area.

In Blauer Stern’s main auditorium, the same saturated colour palette has been kept and the painting has been adapted to decorate the cinema walls.

“In the main auditorium, we covered the walls in a colourfully-printed fabric whose pattern we based on an artwork called ‘Lange Reise’ – ‘Long Journey’ by artist Mechtild van Ahlers, which hangs in the foyer,” Batek explained.

“Scaled up to wall size in the auditorium, the red tones of floral and cloud-like forms float across a deep blue background. The curtain, ceiling and corridor are saturated in powerful red tones, typical for cinemas.”

The second, smaller auditorium was in good condition, so the cinema’s owner, Yorck Cinema, decided to leave it as it was.

Throughout the cinema, neon lights function as both a light source and as abstract art installations.

The studio designed these to reference the plaster ceiling in the foyer – the only original feature left in the building – and had them made by a local lighting firm.

“The lighting was inspired by the historical mouldings of the foyer ceiling whose graphic lozenge pattern has been partially traced with suspended LED light tracks,” Batek said.

“The diagonal pattern of the light tracks continues along the corridor leading to the two auditoriums. And of course, it references the neon sign ‘Blauer Stern’ hanging outside.”

Inside the main auditorium, neon light tubes were also used to trace the arched openings between the hallway and the auditorium itself.

The studio hopes it has given the cinema a modern update, while also respecting its past. “When we are asked to refurbish spaces, we pay great attention to the existing space and its character,” Batek said.

Images by Marcus Wend via Dezeen