There’s an old adage that time is an illusion and when you’re acting out something you enjoy you can lose track of all space and time. No one knows this better than a woman who’s shoe shopping.

So why not help the process along by creating a ‘cave-like’ atmosphere in a shopping emporium to block out the outside world (if only for a few hours)? 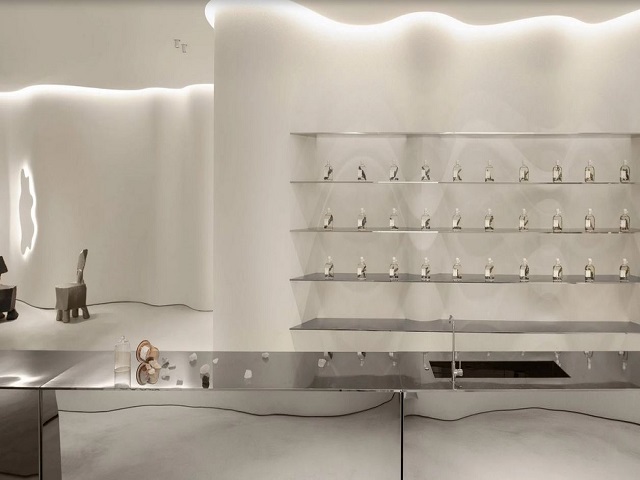 Chinese studio F.O.G. Architecture has added curved walls, mirrored surfaces and faux stone to the interiors of aromatherapy brand ToSummer’s flagship store in Beijing to recall the atmosphere of a cave for this 170-square meter store.

“The brand’s concrete requirement for this space design was a modern cave,” said F.O.G. Architecture. “We chose not to directly create the natural appearance of caves but, instead, presents the characteristic elements of material textures to inspire the sensory experience.”

The entrance to the store is marked by a large faux-stone wall and a mirrored screen, which leads visitors into the store.

The studio explained that the large mirrored screen was designed to draw passers-by into the store while referencing screens typically used in homes and domestic spaces.

Natural-toned, undulating walls envelop the interior of the store and are illuminated by strip lighting set within the ceiling.

The interior was divided and zoned into a collection of small sections each with its own functions, housing retail space, exhibition space and installation areas.

A cream Togo by Michel Ducaroy for Ligne Roset, an off-white Playdough chair and coffee table by Karstudio as well as amorphous mirrors were placed throughout the store suggesting the idea of domestic space.

“The aim of the furniture is to convey a sense of the domestic,” said F.O.G. Architecture co-founder Zheng Yu. “That’s why we named this space a ‘Living Room’. A space that gives people a place to breathe in a busy and fast-moving shopping mall.”

A metal cashier’s table was tucked behind a curving volume and mimics the shape of its walls, forming a rounded counter space that becomes an extension of the walls.

“[The store] transforms the original cave concept into spatial language, integrating it into this realistic space full of modern oriental feeling to present a delicate balance between commercial and art, domestic and public realm, natural and artificial,” said the studio.

Images by Inspace via Dezeen