Architect, David Hotson, has revealed plans for an elaborate five-floor penthouse named ‘The Pinnacle’ at the top of an iconic New York skyscraper, the Woolworth Tower.

When the original art-deco masterpiece was completed in 1913 it was the tallest building in the world at 270 metres, a title it kept until 1930. 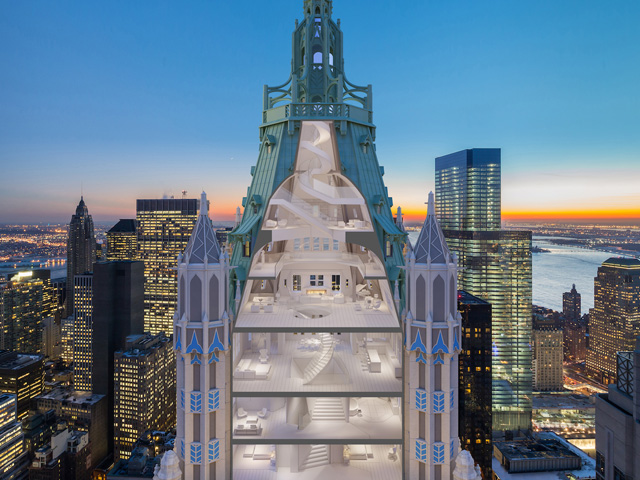 Originally listed for a whopping $US110 million, the penthouse has since taken a price-cut down to $US79 million due to a sluggish high-end market in the city and an overly ambitious listing.

After a five-year restoration converting some commercial space into residential, the building is opening 32 luxury apartments.

Plans have been drawn in collaboration with french architect Thierry W Despont and prices will start at $2.85 million.

Sales have been slower than expected with 30 per cent of apartments in contract or off the market altogether.

“We realize that the market has fallen a bit, and we’re realistic,” Ken Horn, the CEO of Alchemy, told the Wall Street Journal.

With nearly 900 square metres of floor space, the penthouse is being sold as an unfurnished “white-box” unit with no finishings or appliances, so that the buyer can customise the apartment details to their choice.

David Hotson’s bones of the building outline a two-storey living room with subtle naval inspiration including a mezzanine level resembling the deck of a ship.

There is a separate library level with a windows and shelves situated at eye level and overhead and a grand central staircase.

The penthouse also comes with access to its own observatory within the crown of the building which has incomparable 360 views of New York City.

The tower’s amenities include access to a 50-foot lap pool, a sauna, hot tub, lounge, on-site parking, a fitness center and a wine cellar and tasting room.

The grand lobby is manned by a full-time concierge and a 24-hour doorman and decorated by the coffered ceiling from Frank Woolworth’s office and marble floors.

Images courtesy of ‘The Pinnacle’