Green Thumb: a ‘counterpoint’ to metal and glass skyline

Heatherwick Studio has unveiled a 20-storey residential skyscraper in Singapore, which was designed to be “a counterpoint to ubiquitous glass and steel towers”.

Named EDEN, the 104.5-metre-tall apartment building in the Newton district of Singapore comprises a vertical stack of homes that each have a garden. 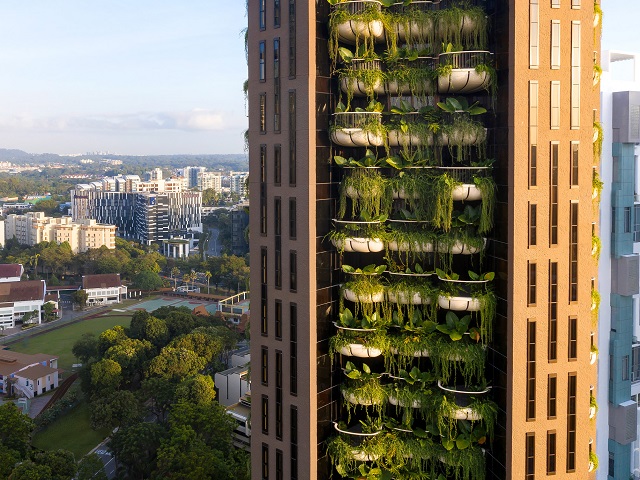 “The project was conceived as a counterpoint to the ubiquitous glass and steel towers of much contemporary high-rise residential architecture,” said Mat Cash, group leader at Heatherwick Studio.

The tower block contains 20 apartments that each occupy an entire floor. Each four-bedroomed apartment’s focal point is an expansive central living space that opens onto a large, greenery-filled balcony. Two smaller balconies also extend from either side of the main living room, while the two master bedrooms also open onto balconies. All of the balconies are made from polished concrete to contrast with the earth-toned structural concrete and have expressive, shell-like forms that act as giant planters for the tower’s greenery.

“Too often balconies on residential buildings are small and inconsequential becoming nothing more than storage areas,” explained Cash. “We wanted our balconies to invite you onto them so we created generous balconies with lush planting. The balconies are in effect giant planters, which form their shape partly in order to accommodate the soil and drainage and partly to evoke a sense of organic growth climbing the facade.”

To encourage the use of outdoor spaces and create cross ventilation, the building’s stairwells and lifts are located on one side of the building, with all the living spaces on the other. The lowest apartment was also raised 23 metres above the ground, with an 18-metre-high lobby and a swimming pool clad in deep-green ceramic tiles created as the base of the tower.

“By moving the cores to the back we created 270-degree views of the city and allow the apartments to be cross-ventilated in three directions,” said Cash. “This firstly encourages you to open up the facades of the apartments for cooling, connecting you with the city, the views then draw you outside where generous balconies acting like raised gardens create the lush immersive experience of being surrounded by nature.”

As EDEN was Heatherwick Studio’s inaugural residential project, the designers were keen to make it stand out from other high-rise apartment blocks that are currently being built. “Many modern apartment blocks are sealed-off boxes that have no connection to the outside world,” said Cash. “It’s really important to smell the plants after rain or see the gentle ripple of leaves as they move. It’s about creating an environment that gives people a sense of well-being and calm.”

The EDEN skyscraper is the latest in a growing number of buildings in the city that incorporate large amounts of planting, fulfilling the vision of former Prime Minister Lee Kuan Yew who imagined Singapore as a “city in a garden”.

It joins the recently completed Jewel Changi Airport and a residential tower called Marina One .

“Singapore is known as the ‘city in a garden’,” said Cash. “It is an incredibly lush, tropical and beautiful city. We wanted to celebrate this by enjoying as close a relationship between the man-made and natural environment as possible,” he continued.