Designed during the first London lockdown by Thomas Heatherwick of Heatherwick Studios in a moment of isolated inspiration, a new planter table brings the outdoors into your home.

Called Stem, the system is made up of six legs of different heights and diameters, which can be combined and clamped onto a desk surface to prop it up. 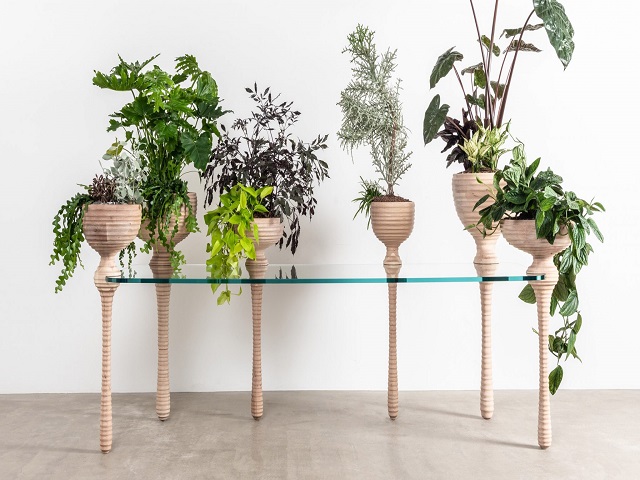 “We thought, what if we designed in effect clamps that are a system of legs, that you can apply to any surface you think you’d like to work at, whether it’s a door or an IKEA tabletop or a piece of stone,” explained the studio’s founder Thomas Heatherwick.

Heatherwick, who designed the desk during coronavirus lockdown, incorporated living plants into the design to create a desk that aligned with the ideals of Attention Restoration Theory, which was developed by psychologists Rachel and Stephen Kaplan in the 1980s.

“It proposes that exposure to natural environments for 40 seconds or so really has very tangible improvements to brain functioning and to help your mind recover and replenish in-between periods of concentration,” said Heatherwick.

“I usually have the luxury of moving around between teams and people and places. And that means that there is a certain kind of mental response that is elicited by variety and textures and differences during the day,” he continued.

“I’ve certainly not sat down for so long since I was a teenager doing exams, so to have spent those months in lockdown London, the environment you’re in seems to take on new relevance.”

Despite the emphasis on emotional wellbeing, the design also remains extremely functional, with the possibility to run electrical wiring through the legs and use the vessel as a storage tray or the base for a light.

In order to make the design as accessible as possible, attaching the legs does not require any specialist equipment.

Once the tabletop is slid into a designated groove, grub screws can simply be tightened from below with an Allen key to secure it in place.