A team of American entrepreneurs have converted a former 1930s factory building into a bathhouse, creating a zone of luxury in the middle of New York City.

The exterior of the Bathhouse, which opened in Williamsburg last month, has been maintained and some of the heritage features inside restored as part of the maze of semi-private bathing rooms. 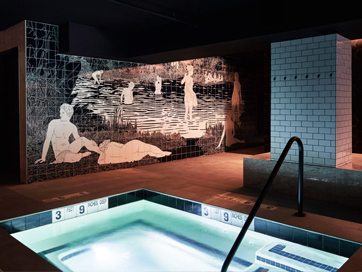 The complex includes a cold pool which has Russian roots, steam rooms which originated in the Roman era, and Turkish-influenced hammams.

“So, we asked ourselves — what do we want to draw from for each culture? What are the most amazing aspects from each?”

“The spa is often an isolated experience,” says Goodman, “but bathhouses are bustling, fun, engaging places.”

“Our guests can just put on a robe after enjoying the baths and head up to the restaurant for a seasonal meal, it’s all meant to be a very social experience.”

The team had to construct an entirely new ground floor because the height of the factory smokestacks hadn’t allowed for interior ceilings.

The 600-square-metre underground spa is lined with geometric matte-black tiles and boasts an Ancient Roman-inspired mural by illustrator Amit Greenberg on the back wall.

The spa also has a sensory deprivation chamber with an isolation tank designed by Float Labs, which is saturated with Epsom salts to create a feeling of weightlessness.

According to the team, Float Labs makes the only tanks that have the global safety certification of being UL-certified.