The design of the ceiling-mounted space dividers, hung from ceiling and are made from leftover materials from Swedish furniture manufacturer Offecct. 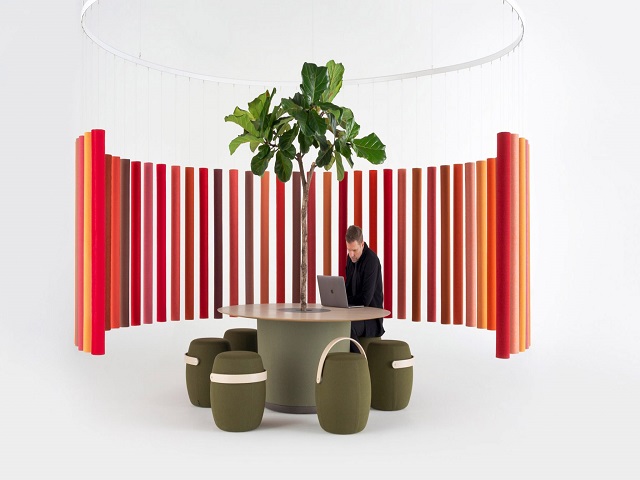 The original idea was to upcycle actual paperboard tubes, but after the designer had presented and tested the initial prototypes, it became clear that these were too heavy and offered only minimal sound absorption. The tubes also weren’t available in consistent quantities.

“Availability becomes a key consideration when designing a high volume product that is made with leftover material,” Ruggiero explained. “As a result, we eliminated the paperboard tube and explored a number of other solutions and materials before deciding on using acoustic felt.”

The final product is made from sound-absorbing acoustic felt that has been moulded into the shape of a tube, held together by a fabric cover.

The acoustic felt was made from a blend of shredded textile off-cuts and shredded PET derived from water bottles. The space dividers’ capability to reduce ambient noise has been certified by independent Swedish acoustic authority Akustikverkstan.

As well as the interior of the Soundsticks, the exterior was also made from recycled material.

“The fabric covers are made from leftover upholstery fabrics which are collected during Offecct’s furniture production, resulting in a random palette of four colours: reds, greens, blues and greys,” Ruggiero said.

“The four-colour range was determined after an internal audit identified the most common upholstery colours used by Offecct,” he added.

The space dividers come in linear, radial, and clustered configurations, with the linear and radial configurations suspended from extruded aluminium tracks that can be combined in different ways to create “rooms within rooms”.

“The project was driven by Offecct’s interest in expanding beyond its pioneering and renowned Soundwave acoustic tiles,” the designer explained. “I was initially asked to explore free-standing solutions — solutions that were ‘not attached to the wall’.”