Mirvac’s plans for a residential tower on the Harbourside Shopping Centre site in Darling Harbour have undergone alterations to create an “improved relationship” to the waterfront site.

Mirvac is playing around with plans to gain approval on the massive site in Sydney’s Darling Harbour, with the ASX-listed developer increasing the height of the residential tower to 167m, adding a new public square and switching the location of the tower from original designs on the 2.05-hectare site. 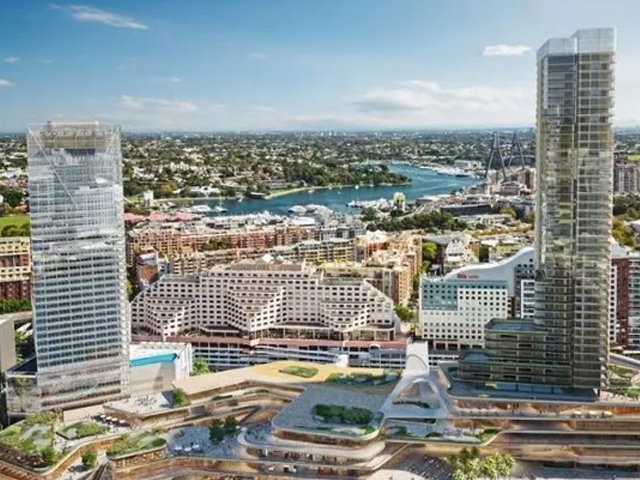 According to the application the tower has moved away from the heritage-listed Pyrmont Bridge to the widest part of the site creating an “improved relationship to the waterfront and ICC Hotel, to minimise view impacts from 50 Murray Street”.

Neighbouring Sofitel Darling Harbour owner Jerry Schwartz is not impressed with Mirvac’s proposal which he said goes against the urban design concept of the precinct.

The latest changes increase the tower height by 12.6m to offset a loss in the podium floor area for the provision of a new public space called Guardian Square.

There has been a number of plans for the site in the past four years, which recently moved to stage three of the unsolicited proposal process, and are currently on exhibition online.

The fjmt-designed tower is part of a 87,000sqm mixed-use development including 45,000sqm non-residential and 42,000sq m residential development.

If approved, stage 1 early works include the demolition of the Harbourside Shopping Centre built in 1988, obsolete monorail infrastructure and associated tree removal.

“The new-look Harbourside Shopping Centre will provide locals and visitors alike with access to a range of open public spaces as well as improved retail, dining and entertainment options,” Draffen said.

“Around $15 billion of investment and renewal has been injected into the Precinct over the past decade, and having the opportunity to reinvent Harbourside will complete the area and link Darling Harbour to the wider Pyrmont peninsula.

“Our plans for the centre, developed after four years of extensive community consultation, have been significantly improved by feedback from government, especially around the public space that will open up Darling Harbour and connect to the Pyrmont Bridge.”

Draffan is part of the new commercial and mixed use development team created at Mirvac following onset of Covid-19.

The group also consolidated office, industrial, retail and build-to-rent teams into a new commercial property division in the last quarter.