Shayher Group is forging ahead on the transformation of the Bulimba Barracks on the Brisbane River with new plans lodged to amend the masterplan for the 20-hectare riverfront site.

Urbis lodged the preliminary masterplan variation application with the Brisbane City Council to allow for five-storey apartment blocks and three-storey townhouse complexes in addition to three-storey detached dwellings on the former naval base. 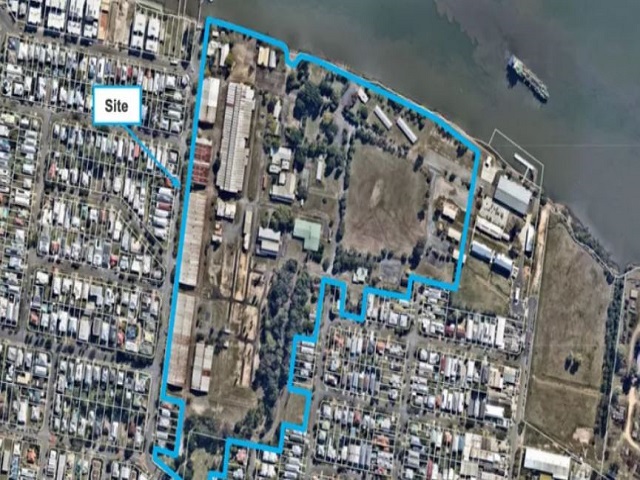 Urbis signalled substantial earthworks would be carried out to raise the ground level of residential buildings and mitigate flood risks to the site.

The Urbis plans provide for a riverfront pedestrian and cyclist path, recreation spaces and barbeque areas, while also acknowledging the former candlemaker factory on the site, with the inclusion of “The Candlemaker Square”.

The report said it would be a “flexible civic space for day and night activities including live music, markets and outdoor dining”.

Existing buildings will be demolished while retaining the heritage-listed World War II fabrication shed, where the American military manufactured barges. According to plans this would become a commercial space within the masterplanned community.

The original neighbourhood plan made provisions for an AFL sporting oval on the site, but Urbis has sought to downsize this green space to allow for a “multipurpose sporting field within the allocated area”. They claimed the site could not accommodate a 185-metre-long AFL field.

If the variations to the neighbourhood plan are approved then a more detailed development application will be lodged with Brisbane City Council.

The Taiwanese-backed Shayher Group, the developer behind projects in Sydney and Melbourne and the $1 billion Brisbane Quarter development, bought the site at 167 Apollo Road for $63 million in 2019.

The Apollo Barges workshop is considered to be historically significant and is on Brisbane City Council’s heritage register. It has been earmarked for a retail hub within the Bulimba Barracks masterplan.

At just 5km from the CBD it will be the biggest inner-city masterplanned community since the Northshore development on the other side of the river.