In the 1930s, the city of Boulogne-Billancourt was a true architectural laboratory. La Maison Connectée is part of this dynamic of research and experimentation.

It is a project that reflects the spirit of creativity and respects the city’s architectural and urban identity and its priceless heritage. 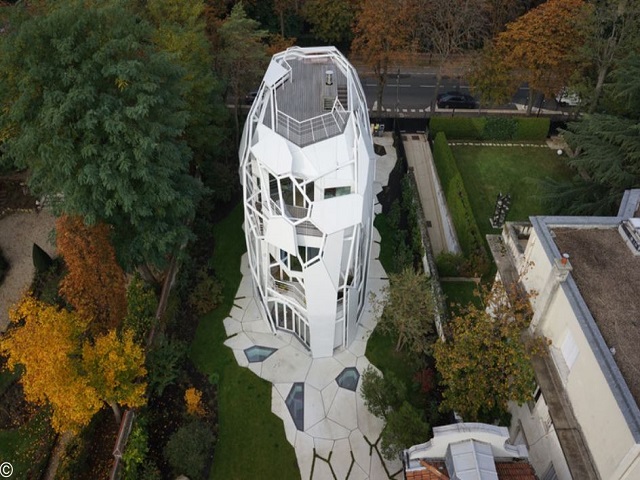 Around the property, the black metal fence is preserved to preserve the homogeneous character of the avenue. Shrub species such as holm oak and evergreen white oak are planted at the edge of the plot in the North and South. They are supported by a few trees with large stems such as Scots pine, magnolia.

The project has been approved by the Architect of the Buildings of France, which supports the City of Architecture and Heritage, and by the APP, an association for the protection of the Parc des Princes district, which brings together residents.

The House was designed around a vertical circulation core extending over five floors, from the basement to the roof terrace and developing concentrically. The main programmatic spaces of the house spread like successive layers of a tree, from the central circulation core, its heart to the facetted exterior façade, its bark. The tree metaphor also works in cross-section, where the soils are supported by a branched tubular structure. This structure is designed as a three-dimensional matrix that becomes the exoskeleton, also allowing the reading of the different layers.

This metaphor is parallel to the programmatic demand for an ecological house. It is intelligent, connected to the urban network and home automation. It also uses underground water systems to provide heating and energy.

The historical context of the house is important, as it continues the architectural tradition of experimental housing in the area, created by architects in the 1920s and 1930s. One of the most famous neighbours is the Porte Molitor building in Le Corbusier.

Images by Roland Halbe via ArchDaily