The $100-million student accommodation project at its Bundoora campus was built from 4500 cubic metres of eco-friendly cross-laminated timber (CLT) and glue-laminated timber, or glulam. 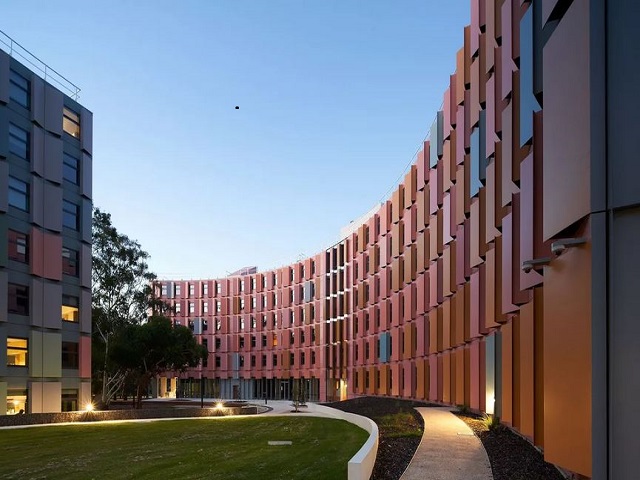 The development was designed by Jackson Clements Burrows Architects.

Multiplex regional managing director Graham Cottam said the use of CLT—a non-toxic, fire-resistant, renewable resource with a long-life cycle—had halved the embodied carbon in the development.

Multiplex said during construction, three cranes were used to lift and place more than 2700 individual mass timber elements, including the building’s structure, prefabricated pods and facade.

CLT has become a popular building material in Australia in recent years due to the speed of fabrication and cost effectiveness.

Its viability gained a considerable impetus after the National Construction Code introduced less onerous requirements for timber towers of up to eight storeys.

The innovative material has the structural strength of more traditional methods using concrete and steel.

The combined energy to produce the material in Europe and ship it to Australia remains lower than the energy it takes to locally produce materials such as concrete and steel.

It is also a good insulator as it resists heat, it can be simply disassembled and reused for future projects and, significantly, it produces less greenhouse gas emissions.

The completed project forms part of a broader initiative by the university to provide housing for 12,000 residents, including staff and students, in varying formats and ownership models.

The $5bn masterplan includes the development of a new city centre on the Bundoora campus with a substantial mix of commercial and retail facilities.

The university will piggy-back off that development to create significant cultural facilities within the city center.

Another major component in the masterplan is a Health and Wellbeing Hub that will include aged care, childcare and super-clinic facilities.

La Trobe, which already holds a 6-Star Green Star Communities rating, is striving to become Victoria’s first net zero carbon emission university by 2029 with its regional campuses on track to be carbon neutral by 2022.