Approximately 8 kilometres worth of hornbeam hedges will cover the facades of the Kö-Bogen II officeblock in Düsseldorf, Germany.

The concept was proposed by Ingenhoven Architects and will is due for completion next year. 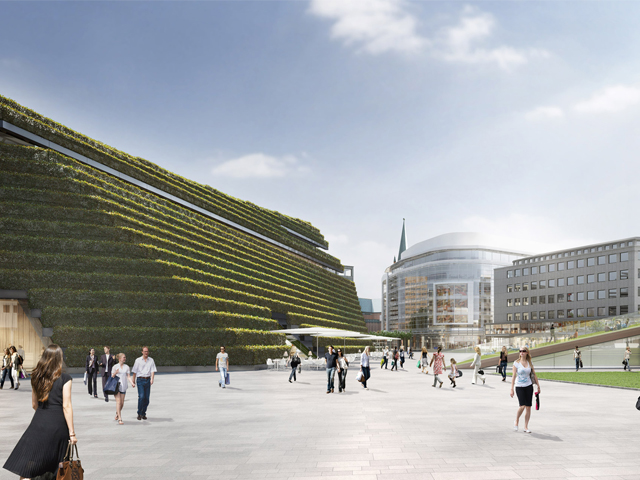 The building’s roof will be covered in greenery according to a planting strategy developed in collaboration with sustainable engineering firm Werner Sobek. It sits opposite the Düsseldorf Schauspielhaus Theater that was also a project of Ingenhoven Architects.

Ingenhoven Architects said, “the main building looks like a virtual ‘vertical park’ with eight kilometres of hornbeam hedges, the leaves of which take on different hues throughout the year.”

The hedges in question have been growing in a tree nursery since 2016 and will be delivered to the site complete with fully formed roots later this year.

According to the architect, the planted façade will help keep the building cool and will help to clean the surrounding air.

The 41,370 square meter office block will stand opposite a smaller triangular building which will house restaurants and retail outlets. It will be also be topped with lawn that will be accessible by the public.

This site is part of a growing trend of office buildings being covered in plants and if their felt effects on the environment are palpable then it can only be a positive thing.

All images courtesy of Ingenhoven Architects

With entries for the 2020 Bluethumb Art Prize opening on October 1, let’s meet the judges who are ...