Located within a quadrangle courtyard in Beilucaoyuan Hutong in Beijing, is La maison Xun, a Chinese style restaurant. Unlike other popular high-end restaurants today, it boasts its comfortable modern art and antique architectural pattern.

Designer Liu Daohua insists on respecting both history and nature. He bringing people into to the essence tranquillity, in the memory of old Beijing residents in today’s bewildering aesthetics. 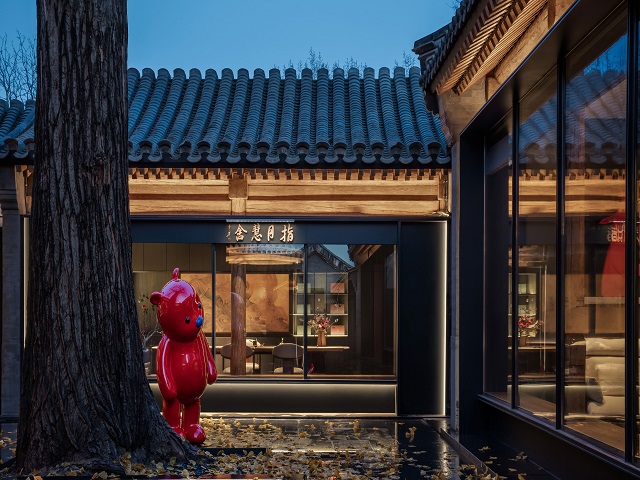 Different spaces assume different forms and meanings. For La maison Xun, its design core lies in the introspective experience in aesthetics and art and also the intuitive sense of times. It allows you to feel the natural tranquillity of the city in the life atmosphere of the ancient Hutong.

Entering into the quadrangle courtyard through the red gate, you can see Chinese traditional art elements such as grey tiles, wooden eaves, black walls, and ancient trees, which will bring people into those elegant years.

“This restaurant is not just a top-level or high-end club, but also a landscape that can restore the nostalgic mood of Beijing.” said Liu Daohua.

With simple and symbolic red and black, “Pupu Bear”, designed by Zhang Zhanzhan, integrates with the simple space of the quadrangle courtyard and conveys natural power and pleasure through its cute and silent animal image, so that guests can forget the noise of the city, feel the return of the mind, embrace warmth emotionally, and look forward to the future.

The designer deliberately avoided any complicated piling up and treated Chinese tradition and ancient charm with an attitude of returning to nature, so as to remove those tedious decorations and restore the architectural structure and historical traces of these ancient buildings.

In such a pleasant environment, the centuries-old cultural attributes, traditional memory and historical temperature of the quadrangle courtyard are re-presented, maintaining the historical beauty while not losing the elegance of modern aesthetics.

Liu Daohua has always regarded the La maison Xun project as one to restore historical buildings so as to undertake his mission to preserve the artistic heritage of Beijing’s quadrangle courtyards through the integration and inclusion of traditional and modern design.

“In the whole space, we did not change much in the form or physical relations, but it was the most important that we constructed the relationship between traditional design and nature.”

The quadrangle courtyard is a rarity but has strong cultural orientation. Liu Daohua, Wang Xiaofei, one of its owners, and Wang Zhenyu all hoped to combine excellent Chinese original furniture and artwork in this building with strong characteristics of Beijing.

The space was integrated with the original furniture and artworks of Maxmarko (founded by Chendarui), and “Pupu Bear” created by Artist Zhang Zhanzhan, so as to jointly create a lifestyle, making the space more diversified and posing more possibilities for the future.

Liu Daohua, as an inheritor in the gap between ancient and modern cultures and also between Chinese and western cultures, tried to find a way to harmonize those solutions.

While enjoying delicious food, guests can feel the calm and peace from the traditional culture, the historical spirit of Beijing’s ancient quadrangle courtyards, as well as the artistic atmosphere permeated by modern aesthetics.

It has not only adopted the new trend of contemporary art, but also integrating the extension of the historical features of quadrangle courtyards to match the new to the old, connect the tradition with the fashion, and combine modern aesthetics and Oriental artistic conception.