“The main focus was on creating something truly warm and whimsical in the heart of a contemporary institutional building,” said the design studio in a statement. 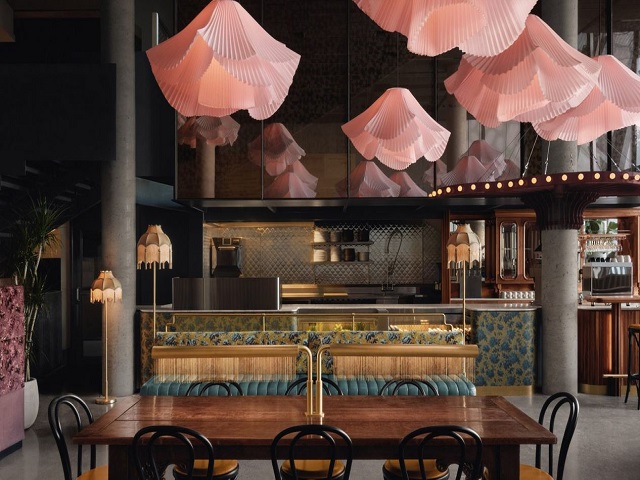 Created as a theatrical experience within the building’s lobby over the 1,400-square-feet (130-square-metre) space. It is used both for social gatherings for the artists and employees, and as a reception venue during and after functions or performances.

In contrast to the large expanses of glazing and concrete finishes of the building, Atelier Zébulon Perron opted for rich materials like walnut, velvet and brass. Wooden screens wrap the cafe, partially shielding it from view while creating intrigue for patrons and passers-by.

“We adopted a theatrical approach in order to build a sort of spectacle that is really quite literal,” said studio founder Zébulon Perron.

“The idea was to create something that seems completely out of place, and that captivates the imagination in a strange and wonderful way,” he said.

A canopy above the bar area helps to bring the tall ceilings down to a more human scale.

Similarly, a series of pleated pendants are gracefully suspended from thin wires above the seating area, at a height that helps create a more intimate setting.

These custom-designed lamps, each a slightly different shape, are made from the same blush-toned crinoline fabric as a dancer’s tutu. Floral-patterned wallpaper, upholstery and carpets, as well as golden lamps topped with tasseled shades, create the impression of a staged scene from another era.

“The tongue-in-cheek approach to Cafe Constance aimed at creating a fun and fantastical space within the more austere backdrop of the building’s contemporary architecture,” Perron said. “That play on contrasts extends to the design within the space as well, with hints of Victorian elements and boudoir intimacy animated by intricate colours, patterns and light fixtures.”

Images by Alex Lesage via Dezeen