Polish design studio Superhelix Studios have come up with a unique style of townhouses that overlap and appear to have gills, in order to better utilise space.

Led by lead architect Bartłomiej Drabik the studio built the units in collaboration with BZMT the outer suburbs of Krakow which is a region dominated by old-school 1990s terrace buildings. 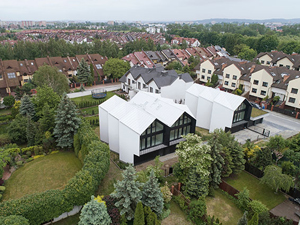 The small-scale residential development is made up of three blocks, each with two units and a garage.

Planning regulations and a small 580 square metre block meant the firm had to come up with a creative approach for the space and allow each unit to receive as much sunlight as possible.

Each unit angles outward as it overlaps its neighbour which allows more natural light to stream in and simultaneously maintain privacy as the units don’t face into each other.

From a front or above view the walls look crooked and continue up to the roof surface while unusual dormers illuminate the attic rooms, giving the appearance of gills.

The walls of the houses are plastered in the same colour of the standing metal seam sheets on the roof which gives the building uniformity.

Its window frames and niches are completely black which emphasizes the structure’s layout and makes the gills more prominent from a distance.

The interior layout and the number of rooms can be modified according to the changing needs of their residents, but the default model is the ground floor unit offering four bedrooms and the apartment above offering six bedrooms and spanning two levels.

The layout has been focused on functionality and each unit has a dedicated small nook ‘for communication’.

The firm has also recently completed a ‘House behind the roof’ project in the area, hiding a large townhouse from view under a green grass roof.