Originally constructed in the early 19th Century, this Tel Aviv townhouse needed a major overhaul to function as a modern family home.

And what family home isn’t complete without a rooftop plunge pool and a secret courtyard garden? 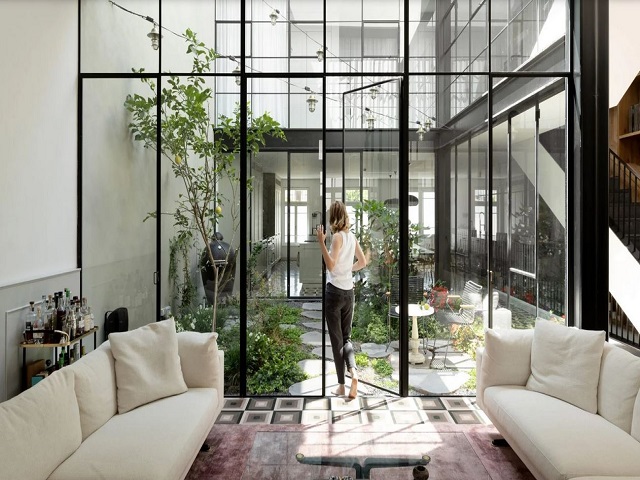 Israeli architect Meirav Galan has brought the townhouse back to life by completely reconfiguring the structure around a new central courtyard, which allows daylight to penetrate rooms on every floor. This prompted the house to be renamed Neve Tzedek Patio House.

The design celebrates the building’s historic architectural details but also introduces new elements, including a staircase that provides better movement flow between the floors.

“On my first visit to the house, underneath all the neglect, I could sense the European charm combined with the local Mediterranean scent,” said Galan.

“I discovered impressive high ceilings, classic European wooden doors and windows, iron detailed balustrades and a beautiful Mediterranean balcony with a Parisian touch. I imagined myself reviving the story and interweaving with my clients’ dreams.”

The owners are a couple with four children, who had been looking specifically for a property in this neighbourhood, as they wanted a home with a distinct character.

As one of the oldest houses in the area, the townhouse offered them the character they were looking for, but the layout was unworkable.

The building was originally single-storey, with an “entrance floor” level set two metres higher than the street.

An additional storey was added in the 1930s, but the staircase was set in a tower outside of the main building volume, meaning the floors felt disconnected and the building’s original facade was partly blocked.

By relocating the staircase at the heart of the building, Galan was able create a more efficient floor plan with less impact to the historic architecture.

A new basement was slotted in beneath the entrance floor, while a second storey was added at the rear in a more discrete extension. As a result, the building’s facade is now unobscured.

“Although the northern facade was declared a ‘preservation facade’, I convinced the preservation department to approve the demolition of the large tower that had held the staircase, which practically hid the beautiful house,” explained the architect.

Thanks to the creation of this extra space, Galan had enough room to create a new triple-height courtyard through the building. Landscaped with Mediterranean plants and stepping stones, it gives the homes a tranquil centre.

In contrast with the heavier elements of the existing architecture, Galan chose industrial-style steel-framed glazing to front this courtyard, creating a contemporary detail that is visible throughout the building.

“I knew from the beginning that I wanted to create a contrast between the patio and the street facades,” she explained.

“While the street facades preserve the aesthetic character of the original house and of the neighbourhood, the patio’s steel framed windows facades were designed as a contrast entity, emphasising the fact that it is a new architectural design telling a new story.”

The reworked layout organises all of the family’s main living spaces around the courtyard. Five bedrooms and three bathrooms are located across the two upper levels, while the basement provides a variety of rooms that include a snug, a guest bedroom and a study.

There is also a second courtyard on the basement level, which helps to bring a little more daylight down to this new floor.

The roof also becomes living space, with the rooftop plunge pool accompanied by a barbecue and lounge area, planting boxes and a balcony with views over the city rooftops.

Images by Gidon Levin via Dezeen