In the ancient region of Tokat in Turkey which has a 2000 year history, the site has Byzantine bathhouse ruins and hot water source rediscovered during excavations conducted at the nearby Sebastopolis Ancient City in Sulusaray. 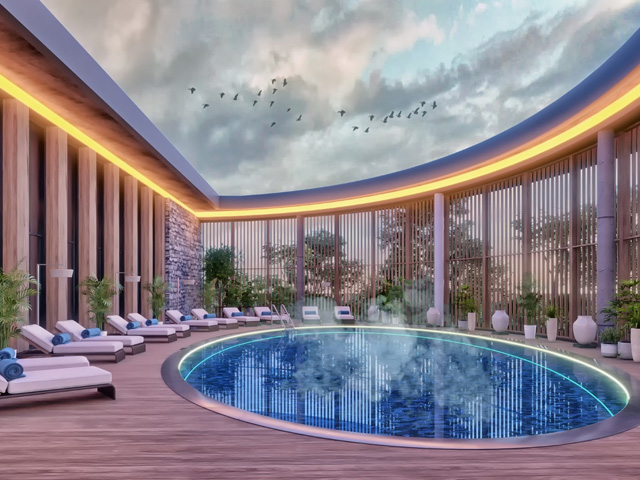 Existing bath facilities structures on the plot that were used during the 1980s but have fallen into ruin will be the backbone of the new construction.

Financial support will be given by the local government for the project as it aims to boost tourism and the local economy.

The architects opted to include wood, sandstone and glass as key materials for the project, trying to keep with the theme of being in touch with the earth.

The studio connected two small hills that form naturally as part of the topography to separate public and private space and altogether the site covers 4,370 square metres.

There is a complex of two-storey private apartments and another of smaller integrated apartments for families.

On the other public side of the hills bathhouses and thermal baths are contained as well as a social centre.

The complex’s separate women’s pool opens into an inner garden surrounded by pergolas which ensure privacy.

The sloping project shape is also fitted with access ramps, and lends itself to walking and jogging tracks, recreation areas, playgrounds for children, and a grove with a garden of flowers.

The subdued interior spaces utilise large dramatic openings and high windows to maximize sunlight and visual connection with the natural surroundings and that also include private gallery spaces as a high-end amenity.