A restaurant located in Madrid has used upcycled junk and site construction waste make up nearly every interior element of the Mo de Movimiento restaurant, created by designer Lucas Muñoz to be as sustainable as possible.

The 1,000-square-metre Mo de Movimiento was partly built from 1,700 kilograms of reused construction rubble from the renovation, much of it upcycled into thick tiles that form the restaurant’s continuous bench seating. 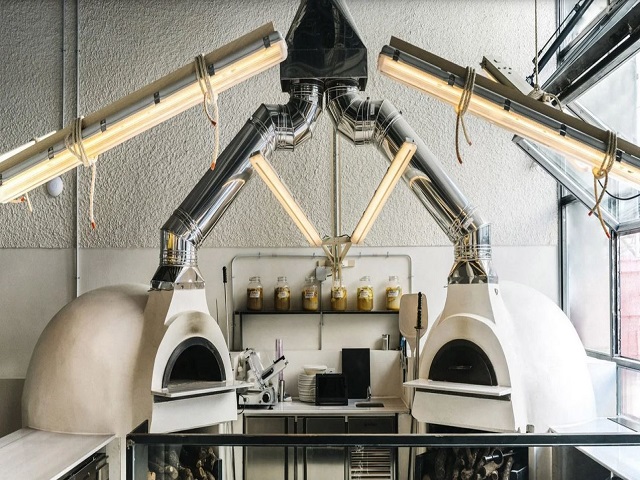 Other furniture was reassembled from wooden structures that were already on the site.

A dedicated sustainability team advised on each new acquisition, taking factors such as energy consumption at the suppliers’ production plants and their employment conditions into account.

The restaurant features an internal courtyard that was made by removing the roof of the former recording studio and consolidating its walls with chicken wire, which also has the benefit of supporting climbing plants.

Inside, Mo de Movimiento’s interior walls are partly finished in rough plaster – a necessary addition to make them fire retardant, as Muñoz tried to avoid decorative or superfluous additions.

Some of the elements created on-site include lighting, coiled spring-like radiators made from plumbing pipe, a main door handle made from a bunch of electrical wires and other doorhandles made from Allen keys.

The wall lights are fashioned from standard elements into almost sculptural objects, or made from fluorescent lamp cases reclaimed from a junkyard and rewired with LEDs.

The dead tubes from those lights have been arranged into a chandelier, rewired with leftovers from the LED roll. The lighting elements were attached to the wall or ceiling with rope, to avoid damage if they need to be moved.

The space also features a number of hanging terracotta pots that function as an adiabatic cooling system.

Inside the vessels, the water cools the hot air, which is drawn inside the pots through a ventilation system at the top. A pump at the bottom of the vessels redirects remnant water towards the restaurant’s garden.

The pots are based on a concrete project Muñoz originally completed during his Master in Contextual Design at Design Academy Eindhoven and were handcrafted by artisan Antonio Moreno Arias using a 500-year-old underground oven.

There is also a system to heat the restaurant’s water using the energy generated by its two pizza ovens, while filtered water from the washbasins is redirected to flush the toilets.

“This is a restoration project that has taken design as an exercise on re-thinking ways of building,” said Muñoz.

“The result is a project that takes construction, architecture and interior design as an opportunity for prototyping sustainable strategies for production, consumption, employment and supply chains.”

Interior of Mo de Movimiento restaurant with chandelier made of upcycled fluorescent lighting tubes hanging next to a long, high table.

He said that his approach with Mo de Movimiento respected the materials involved at each stage of their life cycle.

“All elements are conceived for a life cycle that includes maintenance and repair in their design, as well as takes decay and degradation as elements and variables into the design process,” he said.

“The intervention uses ageing as a resource and the space is conceived to evolve into its final design, allowing nature and human use to be some of the main actors in its completion.”