Waa (we architech anonymous) has transformed a 1970’s warehouse complex in the north of Beijing into ‘the playscape’, an experiential community centre for children.

The building complex is formed by a cluster of existing warehouses encircling a courtyard, while an aerial bridge links the south facility, which is disconnected from the complex by the public street, to the rest of the roof terraces. 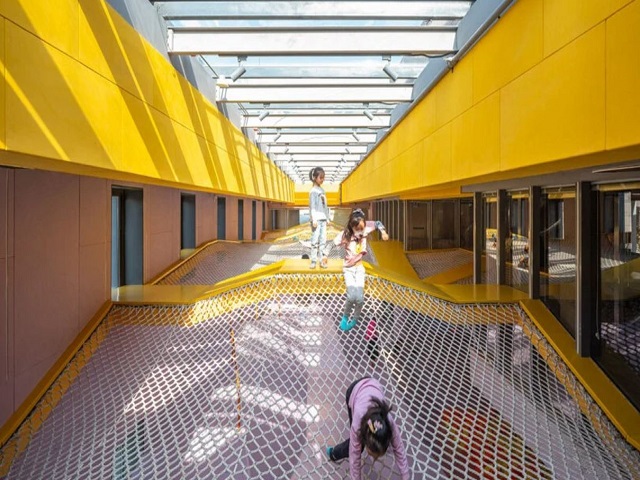 Waa (we architech anonymous) refurbished the industrial complex for a healthcare provider specializing in observing and supporting children’s development relating to movement for a broad range of age groups. ‘The playscape’ seeks to revive the idea of neighbourhood street play and minimize the use of gadgets and screen time.

In order to promote activity-based, experiential learning, the project employs spatial concepts such as an adventure playground, a maze, as well as spaces for children with nooks to explore and understand ergonomics.

Three main architectural interventions bring to life the design concept of Waa’s ‘playscape’ community centre. The first one, titled ‘pipe’, focuses on smaller nooks in the form of connecting bridges and staircases to test body awareness. The second, ‘roof’, presents a high point to overview the stage and its possibilities, and offers a choice to children to embrace unorthodox routes. From the terrace, they can travel under the mound through a network of slides that vary in height from 7 meters to 4.3. Last, the ‘mound’ enhances development in senses relating to equilibrium (balance) and freedom of decision making. A series of hills invite kids to explore and take on a variety of inclines, while the spaces under those hills are also offered as additional, covered play area.

The building complex is formed by a cluster of existing warehouses encircling a courtyard, while an aerial bridge connects to the south facility, which is separated by the public street. Access also provides a private route to an adjoining kindergarten, and an option to enter the adjacent public park.

The cluster offers a series of internal play spaces, including an area with hanging fabrics for 2-4 year olds, a soft space topography for babies, a subterranean interactive environment, and a steep climbing area with a suspended tensile net. All buildings have a looped roof terrace from which parents can easily observe their children while being able to enjoy adult-specific amenities, such as a rooftop bar.

Images by Tian Fangfang via Designboom 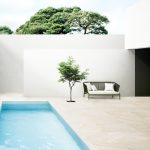