Meriton Homes has been given approval by the New South Wales Planning Panel to build the tallest tower in the city’s west, rising 67 storeys alongside the Parramatta river.

Founded by Australia’s richest man Harry Triguboff, Meriton will build two new towers on the corner of Charles and Church Streets in central Parramatta, knocking down the three buildings currently on the site. 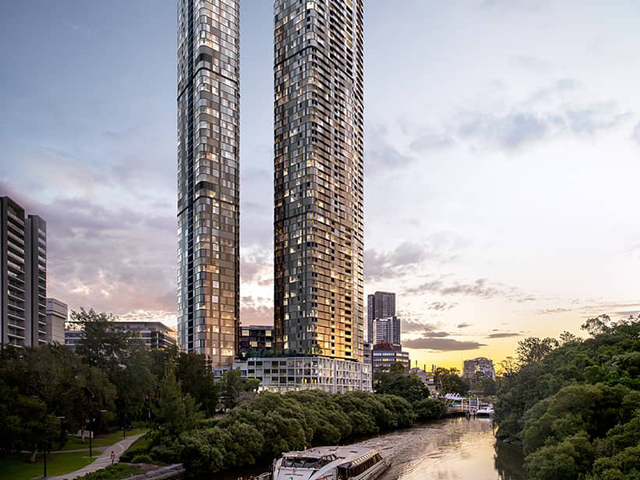 A fourth building on the site which Meriton bought in 2005 will be retained and its 146 apartments upgraded.

The not-quite-twin towers are the design of architects Woods Bagot who won a competition for the contract and originally submitted plans in July 2018.

The glass-faced residential tower will have 535 apartments with one to four-bedroom configurations and some with media rooms, study rooms and entertainment terraces.

Six high-speed smart lifts will service the tower and resident facilities will include a community room, an indoor pool, sauna and gymnasium, and 1200sqm of podium gardens with a barbecue area.

The project will also include a major supermarket and a 75-place childcare centre, and the second tower will be a 58-floor Meriton Suites hotel with 346 suites and high-end guest facilities.

Meriton says its 180 George proposal aligns with the vision of the Parramatta council to deliver Sydney’s second CBD, with tall buildings of world-class design and a reinvigorated city centre, public domain and waterfront.

He said the approval acknowledged that the towers would be part of the large-scale redevelopment of Parramatta set to create thousands of jobs and deliver a new $2 billion Parramatta Square.

“Our 180 George towers will be riverfront landmarks gracing the skyline in what has emerged as Sydney’s second CBD,” Mr Triguboff said in a press release.