Mirvac and Coombes Property Group have submitted new plans for their skyscraper at 505-523 George St, which at 270 metres will be Sydney’s tallest apartment building.

So tall that it will need Aeronautical Impact Assessment approvals, it will sit just below the city’s tallest building Crown Casino which is set to reach 271.3 metres when it is completed. 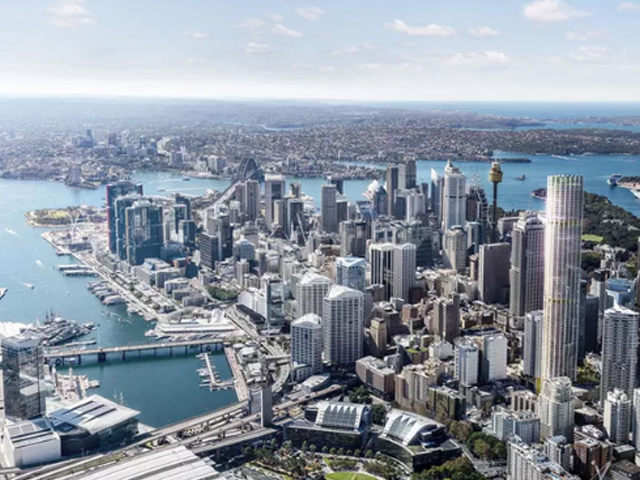 Designed by German firm Ingenhoven and Architectus the apartment tower will include 480 apartments, and has an estimated value of $1 billion.

Dusseldorf-based Ingenhoven and Architectus won the tender for their design in 2018 after wowing a panel of six competition judges.

“The urban approach which provides a connection from George Street through to Kent Street is based on the philosophy of being a friendly neighbour that is highly-integrated with the existing surroundings and acts as a catalyst, enhancing the vibrancy and amenity of the precinct and new developments,” Ingenhoven said in a statement in 2018 when first unveiling the plans.

The application outlines plans to demolish the 6-storey Event Cinemas complex on the 4,308sq m site, which is co-owned by Event Hospitality who have lodged plans for their own 150m skyscraper on a slim site next door.

Built above a podium replacing the former cinema, the skyscraper will incorporate 51,862-square-metres of residential development: yielding 507 apartments across a mix of studio, one, two and three-bedroom floorplans.

The tower will also have 13,441-square-metres of commercial and retail space set for shops, two childcare centres, conference facilities and serviced lobbies.

Greenery will be a feature of the project, with the 35th and 64th floors boasting communal areas with open balconies and a variety of trees.

The tower and the podium complex will both be topped by green roof-gardens.

In 2009 Coombes Property Group purchased the site for $85 million from Challenger Financial Services.

Mirvac will manage the development of the skyscraper, while Coombes will retain ownership of the tower, as per the terms of their joint partnership.

Images courtesy of Ingenhoven and Architectus

The One&Only Mandarina hotel is situated above a string of sandy coves on the Nayarit Riviera, about an ...

Off-grid cabins are the stylish way to ‘commune with nature’

We’ve seen the rise of off-grid cabins spring up all over the world, such as Unyolked in NSW ...

After the release of a prototype and the exhibition in La Biennale di Venezia, SUMMARY studio presents the ...

Sydney’s heritage-listed Minerva Theatre will undergo a $50-million revamp as part of plans to transform it into a ...

Villa Cardo is a three-bedroom house designed by Studio Andrew Trotter, has been built with local materials and ...