The tower is part of the almost-finished Raffles City Chongqing complex, a huge mixed-use development from developer CapitaLand Limited which will include eight towers. Five will be residential with a total of 1400 units. 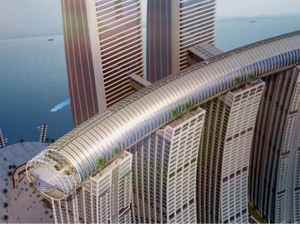 Set at the meeting point between the Yangtze and Jialing rivers, the futuristic development will also have, restaurants, a high-end hotel, lookouts for sightseeing, office space, and a shopping mall.

Named The Crystal, the horizontal skyscraper connects the towers 250 metres above the ground.

It will be the tallest observation deck in Western China and is 300 metres long. One of its main attractions is the conservatory, which functions as a high altitude public space with a themed observation deck and sky gardens and infinity pool. As well as connecting the towers, it has its own fully planned interior landscaping with streets and gardens.

So large it had to be divided into nine panels to be erected, the steel structure weighs 12,000 tonnes and is enclosed with a ring of glass and aluminium panels.

“More than just a building, Raffles City Chongqing is a landmark urban renewal project that expresses and shapes Chongqing’s global city aspirations,” he said in a statement.

As the master planner of this important site, CapitaLand fully appreciates the historical and cultural significance of Chaotianmen to the people of Chongqing.

Our goal is to create a vibrant riverfront urban district that serves as a dynamic city gateway befitting of Chongqing’s growing economic influence.”